Each of the 50 watches is accompanied by a special edition book , produced by Breitling in collaboration with leading modern aviation artist David Bent.

The watch and book were unveiled at the Breitling boutique on New Bond St on Monday night. 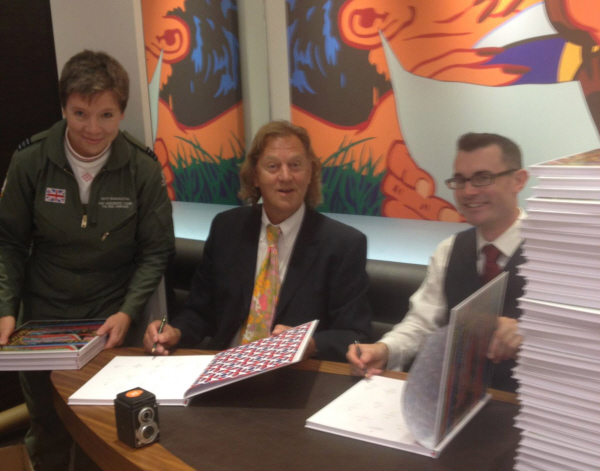 David’s original ‘Timeless’ painting of the Reds flying past Big Ben – which we have written about on Adventure 52 before here – is on the front cover of the book which features many of David’s other outstanding artwork, inspired by time he has spent with the Red Arrows. The book will no doubt become a collectors item as it marks the Reds’ 50th anniversary.

Having worked with Breitling, the Red Arrows and the Times Group on the book, David and Carole Bent said: “It has been an excellent collaboration, with great teamwork and we are very pleased with the result.”

Breitling’s status as official watch supplier to aviators first came about with the RAF in the 1930s with the development of on-board chronographs for use in prop-driven fighter planes during WWII.

Further developments in watchmaking were made with the first wrist-worn chronograph for pilots and this set the scene for launch of the iconic Navitimer watch in 1952. The watch had a circular slide-rule able to measure average speed and productivity rate and was soon named the official watch of the AOPA (Airline Owners and Pilots Association).

Breitling’s boutique is marked by the yellow flag in this shot of Bond Street.

David Bent’s innovative approach to aviation art has established himself as a leading artist in this field. His journey with the Red Arrows began way back in 2006 and Andrew Morton, PR manager for The Red Arrows, has some particularly good words to say about his work: “With wonderful use of colour, expert detail and creativity, David Bent’s work perfectly showcases both the excitement of flight and its inherent beauty,” Andrew says. “His art reflects the precision and engineering excellence of the Royal Air Force Aerobatics team. In addition, he captures the imagination of those who see and are inspired by his pieces – just as the Red Arrows do with every performance and display.”